Gijón is situated in the Principality of Asturias in northern Spain, on the Atlantic seaboard. It is the largest town in the region with a population of 271,843 (INE 2018).

One of the defining features of Gijón’s identity is its Roman-era archaeological heritage. Several decades of intense research and the development of an archaeological plan by municipal authorities have helped identify the city’s Roman origins, making it a reference point for Roman culture on the north of the peninsula

The city boasts a number of highly important historical and archaeological features, particularly the pre-Roman and Roman fort at Campa Torres, the urban centre in Cimavilla and the rural nuclei or villae at Veranes. Few towns in the regions bordering the Cantabrian Sea can lay claim to such a complete set of archaeological monuments.

Each year, over a hundred thousand people visit the archaeological museums of Gijón. However the reputation of our museums is not based primarily on the number of visitors, but on their extensive range of high-quality activities, adapted to suit different audiences. They are on-site museums—in other words they are located on or near archaeological remains—and this direct link with the territory aids in their protection and publicisation. The baths were built at the end of the first century and beginning of the second century CE. The main rooms were extended over time to cater for an expanding population.

An on-site museum was opened at the baths in 1995. The park, which includes an Astur-Roman fort, explains the early history of the principality and the origins of the city of Gijón. It gives us an insight of the development from the pre-Roman to the Roman periods. The park contains three main buildings: a reception area, the museum and a lighthouse. The archaeological trail includes thirteen information points showing key features of the archaeological digs. There is also information on the different types of plant and how they have developed historically to form the landscape we can see today.

From October to March

From April to September The Roman villa, which is situated 12 kilometres from Gijón, covers an area of one hectare. It stands halfway up a hillside, some 150 metres above sea level, on the Roman road known as the Silver Way.

The villa at Veranes was a large agricultural centre founded in the first century CE, during the reign of Flavius. It remained in use until the fifth century CE. After this period, it was used for other purposes and alterations were made to the buildings, but it continued to be an important local centre of activity and religious worship throughout the Middle Ages. The city wall of Gijón was built during the late Empire (end of the third century CE and first third of the fourth century). Documented in mediaeval chronicles, it protected Gijón until 1395 when King Henry III of Castile ordered it to be knocked down and the city destroyed as punishment for its part in the rebellion against the Trastámara dynasty. The wall, which was 850 metres long, with a maximum height of at least 3 metres and a width of 4.6 metres, protected the Cimavilla peninsula.

The tumular necropolis of Mount Deva is an archaeological complex with a dozen archaeological sites, nine of which are burial mounds and another one is a quarry to get large blocks of stone and build large graves, there is at least 5,000 years. Thanks to the information collected during the excavations, the site has been valued, and offers to the public heritage of Gijón, not only a leisure area placed in a great natural beauty, also information about a transcendent space used a dozen centuries before. A mountain sanctified by oldest societies, which transformed the mountain into a resting place for their dead.

open all the year The” Vía de la Plata” Route is a current, cultural and tourist itinerary that runs through the west of the Iberian Peninsula, from Seville to Gijón. There are archaeological testimonies in this route since the Tartessian times. Rome used it during the Conquest Wars.

The itinerary enters in Asturias through the highlands of La Carisa and runs through the central area until it arrived at the Cantabrian Sea in Gijón. In the municipality of Gijón the route is organized in 2 stages with a north-south direction.

First: Gijón-Venta de Puga: You can start the tour from the Archaeological Natural Park of Campa Torres or from the Roman Baths of Campo Valdés.

Dating from the third century CE, this was the first facility of its kind to be excavated anywhere on the north coast. After careful study and cataloguing, the remains of the plant were covered over again.​

Gijón has a truly extensive range of hotels. You may choose the hotel that suits you best according to its location, in the city centre or in the surroundings, number of stars, services, etc.

Among the accommodation available in Gijón, there are also outstanding country hotels, especially suitable for enjoying the peace and tranquillity of the surroundings and the quality of their facilities and services.

Gijón has a wide range of more economic accommodation that is not lacking in facilities and comfort.

Rural Gijón invites you to enjoy its country cottages, situated right in the countryside, just a few minutes from the city centre, in a beautiful natural setting.

The young also have the possibility of staying at Gijón´s youth hostel, with its spacious facilities and wide range of activities.

Another formula for enjoying a pleasant stay in Gijón are its tourist apartments. 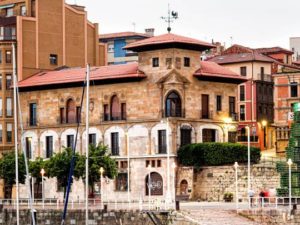 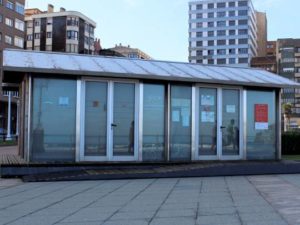 HOW TO GET HERE?

Running South-North from the interior of the Iberian Peninsula, the layout of the former is defined by the N-630 Ruta de la Plata National Highway (Gijón-Sevilla) and parallel to this, the A-66 and AP-66 motorways (Benavente-Gijón and León-Campomanes, respectively), which facilitate ease of movement from the south of the peninsula: Madrid, towns and communities along the Ruta de la Plata and other road links.

The A-66 motorway is currently being developed along the entire 800 km route between Gijón and Seville, of which, nowaday, more than one third is in service, and the rest is under construction.

The second major road link, which runs East-West along the entire Cantabrian Coastline, is defined by the N-634 National Highway (Irún-Santiago de Compostela), which in Asturias forks along the coast via the N-632 (Ribadesella-Canero), known as the Carretera de la Costa (Coastal Highway), thus enabling one to either head inland or drive right alongside the sea. This corridor, running parallel to the Cantabrian Sea, is now practically doubled up in the East from the French border to Gijón by the Cantabrian Motorway and Dual Carriageway (AP-8 and A-8), which is presently in diverse stages of construction towards the West from the centre of the Principality of Asturias to Galicia.

Gijón, Oviedo and Avilés are just a few minutes away from one another, linked by the motorway popularly known as the “Y”, which connects up the A-8 with the A-66. The new dual carriageways, the A-64 (Villaviciosa-Oviedo) and the A-63 (Oviedo-Grado-Salas), as well as the AS-1 Mining Valleys Dual Carriageway (Gijón-Mieres) offer a new layout of major roads within the region that, alongside the fully renovated network of regional roads, connect Gijón with great ease to the rest of the Boroughs and Shires of the Autonomous Community of the Principality of Asturias.

Diverse passenger road transport companies connect Gijón with a wide range of daily possibilities, with daily links with Madrid and the main cities in Spain, as well as with other points in the Asturian community.

The Railway Companies RENFE and FEVE link the town with the rest of Asturias and Spain. RENFE has possible daily destinations with Madrid, Barcelona, Alicante (except Saturdays) and combinations with other Spanish towns and cities.

Asturias Airport is located in Santiago del Monte, in the borough of Castrillón, and has connections with several major cities and islands: Madrid, Barcelona, the Balearic Islands, the Canary Islands, Paris, London…

The Airport is a thirty-minute drive from Gijón on the fluid motorway link (A-8).

Visitors that arrive by air have three options to get to the town:

There is a taxi rank in the airport itself that is in service until the arrival of the last flight.

Four car hire firms offer their services with a broad timetable. These firms also have branches in Gijón:

The Port of El Musel , six kilometres from Gijón town centre, has one of the most important port installations in the north of Spain.

Thanks to its excellent location, its deep drafts and sheltered waters, cruise ships may enter and dock in El Musel.

HOW TO GET AROUND

The town has a complete, easy-to-use network of public bus lines, EMTUSA, that facilitates access to all corners of the town and its surrounding countryside.

Another comfortable form of transport is the Taxi.

The traveller will find numerous taxi ranks around the town and may order a taxi by calling either of the two taxi cooperatives in Gijón: